A prerequisite for a correct functioning of a built-ins is its proper assembly, use and maintenance.

The built-in for balcony/terrace in the Copal systems is a shielding,non-thermoinsulated built-in that protects against outdoor conditions such as: precipitation, wind blows, dirt and dust. It makes an additional obstacle for a burglar and additionally protects against traffic noise.

It is necessary to remember that for the time of absence or in case of predicted weather change, the built-in should be closed in order to avoid unwanted covering with snow, flooding with rain, or entering by third parties.

Since it is the-so-called "cold" built-in of non-insulated rooms, in order to avoid condensing water vapour on glass, a suitable airing of the room built in shall be provided, e.g. frequent airing or leaving the built-in slightly opened.

1. In the left rotating wing, unlock the lower opening handle and open it by slightly pulling the cord towards the inside of the balcony, or by turning the knob (optionally); it will unlock the blockade. Rotate by 90° to open the wing to the inside.

2. Slide the following, neighbouring wing with a brisk movement in place of the first one until you feel resistance, release the lower ratchet (optionally) by pushing it, turn by 90° to the inside and put it aside on the already open wing.

We suggest sliding wings by grasping them with both hands somewhere in the middle of their height and near the opening handle. It's recommended that force be uniformly distributed to make sliding easier; otherwise elements might get blocked.

3. After folding all the wings to the inside of the balcony, protect them against free movement with the docking device and immobilize them.

4. After opening the covering and immobilizing the wings inside the balcony, remember that if the wind intensifies you should close the covering immediately. Not obeying this recommendation may cause damage to the covering system.

5. In order to close the covering system, follow the, instructions in point 2 in reverse order. Make sure you slide respective elements as close to one another as possible. Incorrect sliding of neighbouring wings may make it impossible to close the first wing.

6. In case of problems with opening or closing the balcony covering system (despite observing this manual), don't undertake forceful repairs. Call the assembly team in such a case.

8. For the window to function properly, the guides in the window casing need to be kept clean.

9. It is recommended that dust be removed from the lower guides and sealing brushers at least twice a year (or more frequently depending on the dust level in the environment).

Disassembly and adjustment of the covering system in the warranty period is prohibited under pain of losing the warranty.

Glass elements may hit one another during windy weather due to butt connections; it is not a construction fault.

Possible problems in operation of the COPAL balcony covering system:

1. First element cannot be opened – please push all the remaining elements in the direction opposite to opening.

2. Elements do not open to the inside – please slide element to the opening place, and open it to the inside by pushing strongly.

Move the second, neighbouring leaf firmly towards the first one, as far as it will go. Release the lower catch (optional) by pushing it, rotating it 90° inwards to position it on the already open leaf. 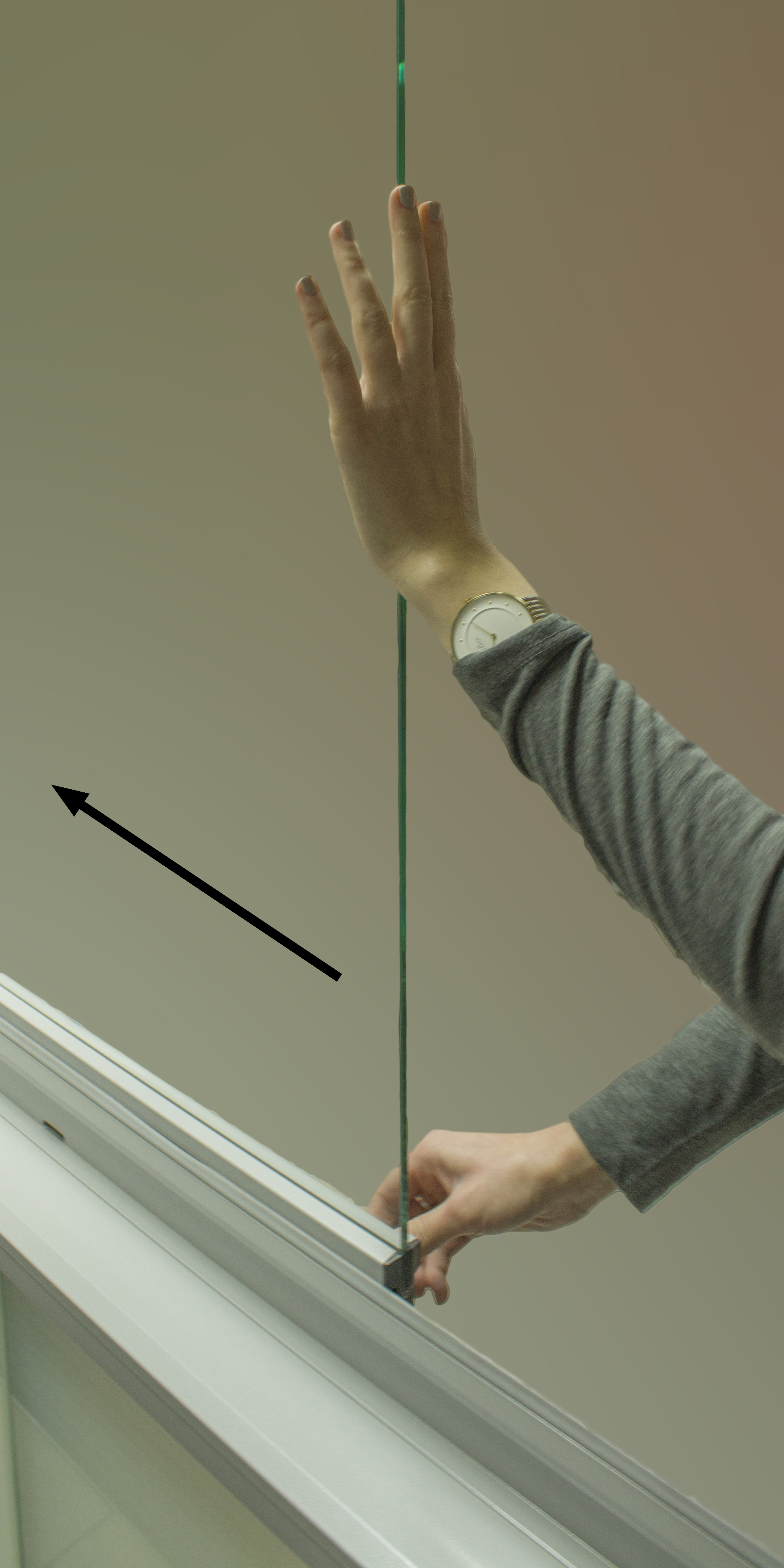 We suggest moving the leaves by grasping them with both hands at mid height. Pull on the leaves evenly to ensure the elements move easily and do not jam.